Spotlight: Robert Katende, Coach of the Queen of Katwe 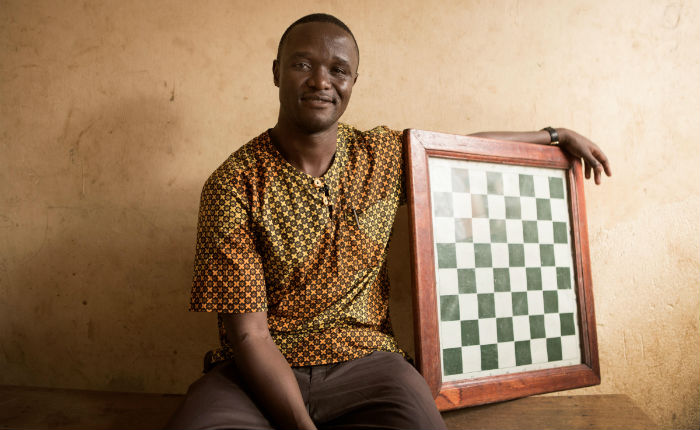 What do you call the coach of a queen?

This week’s Chess4Life Spotlight guest Robert Katende is just that. He was the coach of Phiona Mutesi, the “Queen of Katwe” (you can even see Robert in the Disney film!). Though Phiona may be Robert’s most well-known student, he has impacted many other lives as well. His organization has helped over 25,000 children!

Robert Katende was raised in the slums of Uganda. Despite the many obstacles he faced, he eventually made it to Kyambogo University where he studied civil engineering and began volunteering with Sports Outreach. Robert first reached out to kids through football (soccer) but transitioned to introducing and developing chess programs in the slums of Uganda, as well as in internally displaced people’s campuses. (You might remember how Benjamin Mukumbya’s mother saw that chess had more benefits than soccer – well, Robert is of the same mindset!)

Robert believes that “everyone has a seed of excellence that needs to be nurtured to harness their God-given abilities” and he believes that chess can help provide that nurturing. Robert and his team use chess as a platform to set kids on a meaningful life trajectory. Even having tangible goals (like chess goals) to dream for and work for can help these children tremendously in life.

Chess affords children the opportunity to develop the inner belief that they are problem solvers. This self-knowledge can give them the confidence to make it in life. Robert also sees the numerous academic benefits of chess and how it helps develop essential thinking skills. Overall, chess allows for the transformation of mindset, which Robert believes is one of the first steps in learning.

When Robert first brought chess to the slums of Uganda he had one chess board that he’d brought with him from college. The kids did not know what it was and had never even heard of chess. It was a new game in the entire community. Now his organization has impacted 25,000 lives and they are working to open a school that will educate 800 kids per year.

At this school, children will experience not only the benefits of chess, education, and vocational training but also food provision, basic medical care, psychosocial support, and mentoring. If you’d like to get involved or keep up with all Robert is doing, check out SOM Chess Academy here.

Want to hear Robert’s full inspiring story? Check out the interview below!